RenderZone allows you to create photorealistic renderings based on the LightWorks® rendering engine. It offers three levels of rendering: simple, z-buffer, and raytrace. A user can start developing the image of a 3D model at the simple level and gradually turn on features and render it at the most photorealistic level. RenderZone also includes the ability to produce images based on global illumination techniques, which create renderings with the most realism, as the illumination of a scene takes into account the accurate distribution of light in the environment. In RenderZone, global illumination includes final gather, ambient occlusion, and radiosity techniques, which can be applied separately or can be combined.

One or more lights can be used, which can be ambient, distant (sun), cone, point, projector, area, custom, line, environment, and atmospheric lights. Lights may appear to glow in images, simulating the reflection of lights off dust particles in the air. Environment and atmospheric lights are advanced lights, which are especially optimized for global illumination. Other light types produce soft (mapped) or hard (raytraced) shadows.

Cubic and spherical environment mapping, bumps, backgrounds that include alpha channel support, depth effects, and post processing effects can be applied. Blur is an example of a post processing effect that simulates focusing your camera to a particular area of your modeling scene. Sky backgrounds that are procedurally generated come close to real skies that you may have captured with your camera.

State of the art shaders are used to render surfaces and other effects. A Material is defined by up to four layers of shaders, which produce color, reflections, transparency, and bump effects. Patterns in shaders can be pre-captured images or can be produced by a procedure. Transparencies, reflections, and refractions can be applied at the z-buffer and raytrace levels. The reflections and refractions are always correctly raytraced, even when they are produced by the z-buffer rendering. This is achieved by applying a mixed rendering method, where surfaces with no reflections are rendered using z-buffer and the rendering effects of reflective surfaces are produced using raytracing. Raytraced renderings can be accelerated by the use of multiple processors. Also available is a sketch rendering mode that produces non photorealistic images, which appear as if they were drawn by manual rendering techniques, such as oil painting, water color, or pencil hatches.

Final gather creates ambient light by distributing it non uniformly. It does this by calculating a single bounce of light in the scene. As a result, areas which are otherwise not reached by light directly are now illuminated. If one desires, a more accurate illumination can be calculated through radiosity, by allowing light to bounce more than once. Final gather will incorporate the extra illumination from radiosity together with light from advanced light types, such as environment and atmospheric lights to create illumination with a high degree of realism. It may be combined with ambient occlusion for images of the best quality

Ambient occlusion may be used for artistic effects, such as pencil stipples

Ambient occlusion is the simplest of all global illumination methods in RenderZone. Control of ambient occlusion is easy and straight forward. By manipulating just a few parameters, one may turn an otherwise flat shaded image into a detailed, shaded rendering with a high degree of realism. It can be used for both interior and exterior scenes. Rendering times increase only slightly

Multiple light sources of different types are mixed in this interior 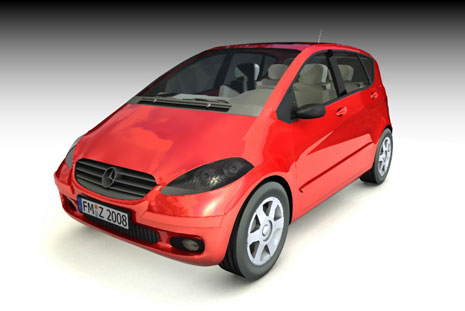 For different HDRI maps were used in these renderings as environment lights, reflective environments and background

High Dynamic Range Images (HDRI) can be used as the source for environment lights leading to realistic images with smooth shadows and complex illumination. HDRI may also be used as environment reflections and image backgrounds combining all three aspects in a single rendering

RenderZone may simulate the interaction of light and dust particles in the air to create a volumetric glowing effect, also known as volumetric shadows. This effect can be enabled on a per light basis for certain light types 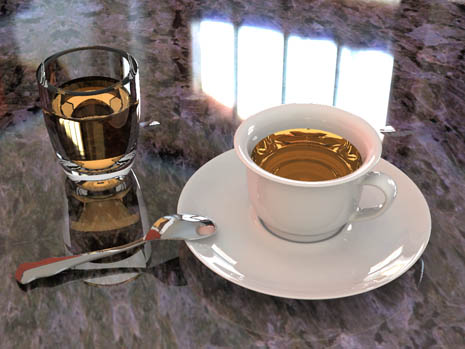 State of the art shaders are used to render surfaces and other effects. A material is defined by up to four layers of shaders, which produce color, reflections, transparency, and bump effects. Shaders are either procedural or precaptured texture maps. Procedural shaders generate a pattern by executing a procedure. These effects are generated from scratch and do not use a prestored image. In contrast, precaptured texture maps use an image file which is mapped onto a surface, either for painting the image on the surface, or for using the image as a transparency filter or as a bump map

The Material Library interface in RenderZone

Materials can be created from scratch or may be chosen from a set of libraries containing metals, glass, brick, stone, wood and other commonly used materials. Predefined materials are added to a project with a simple drag and drop mechanism 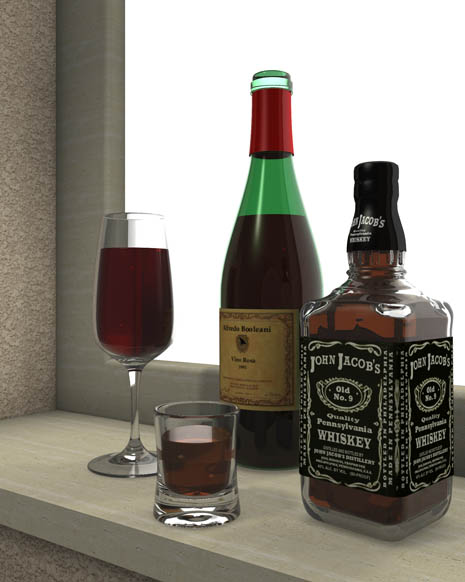 The labels were added as decals

Decals can be attached on top of other materials to produce a variety of rendering effects, such as labels on objects, graffiti on walls, partially reflective surfaces, masked transparencies, and more. Up to thirty-two decals can be applied to a single object and, because these decals may freely overlap, the rendering effects can be combined in virtually unlimited ways

Certain rendering effects can be added to a completed image without the need of re-rendering the scene. Effects such as depth blur, lens flares and exposure correction can be enabled one at a time or in combination with each other. Each effect executes very fast allowing for many alternatives to be explored interactively

Starting with a basic rendering and a sun light only

Renderings can be developed by adding effects one at a time, trading increased realism for rendering speed. Initial renderings may be simply shaded. To increase realism, global illumination effects may be added one at a time. Portions of the scene may be rendered with the Render Area rectangle, allowing for small snapshots of scene to be generated at much reduced rendering speed

Sketch is a separate rendering plugin, which is based on an initial RenderZone rendering. It adds effects which make the image appear as if it were drawn by hand using various traditonal paint and pencil methods